How’s it going, readers?! I hope you’ve had a GREAT week so far – I have been guardedly excited recently as I find myself approaching a milestone in some important personal goals that I’ve been working at for some time. I believe success comes from a combination of a strong work ethic, having a general (or specific) idea of what your goals are and a plan for how to reach them, a positive attitude,  a solid support network, a lil patience, kindness to others and good luck. I hope you are looking forward to your future like I am, with lots of goals to be hit and knocked out of the park!

Today I put together a look using a dark plum colored eyeshadow with some pink highlighter shadow at the inner corners of my eye and also at my brow bone, with some apricot-ish colored blush, and a pink lip. I typically NEVER wear purple on my lids because I always feel like I’m walking around with two black eyes, but I am starting to think it can be done because I have seen a flawless version on a colleague of mine. I also wanted to try this eyeshadow look because – broken record- I am still trying to figure out how to make eyeshadow look good on my hooded eyelids, and recently I found a request in my inbox asking me to explain how to do this… I am no expert but I will try!

So what I have done here is taken the plum color and patted the color on to my eyelid using a c shaped eyeshadow brush. Where I usually make the mistake is that I will raise my eyebrows ever so slightly when looking in the mirror (weird habit) and this is bad because I appear to have more visible lid space than I actually do. By refraining from this habit and looking straight ahead at my eyes, I can tell where the eyeshadow will show and which part of my lid disappears under the ‘hood’. Then, I can take the eyeshadow a bit higher than I normally would, where it is not concealed! Extra definition to the eyes with black eyeliners at the upper water line and lower lashline, and mascara OBVIOUSLY. Voila – I have solved the mystery of hooded eyes and eyeshadow!!! I’ll get to eyeliner next time because that shit is 10x trickier. 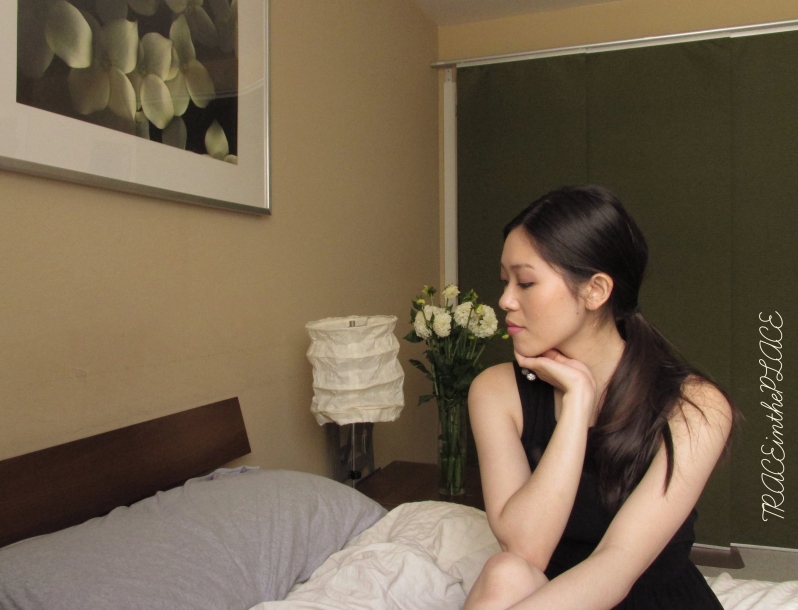 Ah, now to the hair. This is first day hair -YAY!- which is why I am not doing anything very complicated. I was thinking about leaving it down but I realized that the cut and length of my hair makes it difficult to leave down. It’s basically a one length and it almost hits my rib so I would now say it’s surpassed medium length… long hurr, don’t curr!!! This is great, but the front right now is so long and will just hang in front of my face if I don’t control it. I think it is time for a hair cut as it has been about a year since my last one. The solution today was a simple and clean low pony, with some very light teasing in the back to reshape the appearance of my oddly flat skull. Very easy, comfy and loooow maintenance. Yes we love that!

Finally, shout out to these dahlias I bought today at the farmers market for like $3.50. I also got some pink ones for my mom. I’ve never bought flowers for myself but I feel like they’re so uplifting and beautiful!  LAST SHOUT OUT to the dress I am wearing today. I bought this at crossroads for $10… it’s so cute!!! Ready to meet with a girlfriend now! Have a great week y’all. Go get yourself some flowers!